The unique physical and chemical properties of most traditional materials are largely determined by the spatial arrangement of the constituent building blocks (i.e. atoms) relative to one another.  When the scale of the building blocks extend to the range outside that of atomic elements (e.g. nanoparticles), the 'artificial solids' composed of such nanoparticles exhibit unique properties different from their bulk counterparts. In particular, monolayer two-dimensional (2D) artificial solids, serving as the structural basis for more complicated nanostructures, display distinct collective optical, electrical, and catalytic properties, thus finding vast prospective applications in high-performance solar cells, electrogenerated chemilumines, chemical sensors, transistors, integrated microcircuitry, batteries, capacitors, and thermolectrics. Akin to traditional materials, the physical and chemical properties of artificial solids are not only dependent on the elementary nanoparticle size and shape, but as importantly on the interparticle separation and the periodic arrangement of the constituents.

FSU researchers have successfully prepared monolayer gold nanoparticle (Au NP) films using a water/organic solvent self-assembly strategy. A new approach, “drain to deposit”, is demonstrated most effective to transfer the Au NP films from a liquid/liquid interface to various solid substrates while maintaining their integrity. The interparticle spacing was tuned from 1.4 nm to 3.1 nm using different length alkylamine ligands. The ordering of the films increased with increasing ligand length. The surface plasmon resonance and the in-plane conductivity of the Au NP films both exhibit an exponential dependence on the particle spacing. These findings show great potential in scaling up the fabrication of high-performance optical and electronic devices based on metallic nanoparticle superlattices.

In addition, these FSU researchers have developed a three phase system for depositing monolayer gold nanoparticle films. Using this three-phase system, centimeter-scale monolayer gold nanoparticle (Au NP) films have been prepared that have long-range order and hydrophobic ligands. The system contains an interface between an aqueous phase containing Au NPs and an oil phase containing one of various types of amine ligands, and a water/air interface. As the Au NPs diffuse to the water/oil interface, ligand exchange takes place which temporarily traps them at the water/oil interface. The ligand exchanged particles then spontaneously migrate to the air/water interface, where they self-assemble, forming a monolayer under certain conditions. The spontaneous formation of the NP film at the air/water interface was due to the minimization of the system Helmholtz free energy. However, the extent of surface functionalization was dictated by kinetics. This decouples interfacial ligand exchange  from interfacial self-assembly, while maintaining the simplicity of a single system. The interparticle center-to-center distance was dictated by the amine ligand length. The Au NP monolayers exhibit tunable surface plasma resonance and excellent spatial homogeneity, which is useful for surface-enhanced Raman scattering. The “air/water/oil” self-assembly method developed here not only benefits the fundamental understanding of NP ligand conformations, but is also applicable to the manufacture of plasmonic nanoparticle devices with precisely designed optical properties. 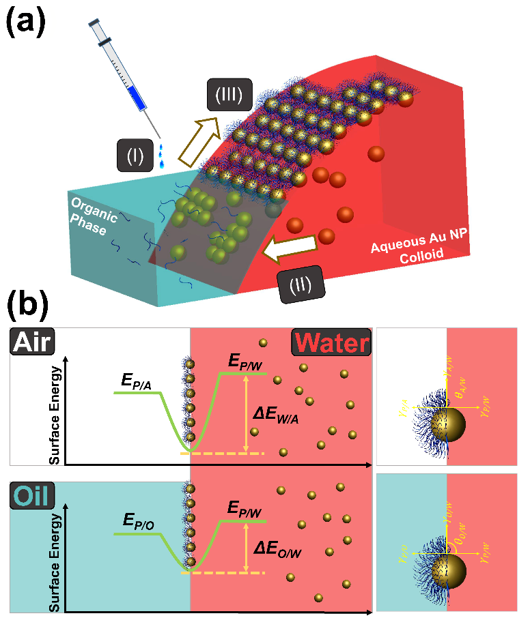