In the past decade, huge effort and resource has been devoted to developing proton exchange membrane fuel cells (PEMFCs) technology to realize the wide commercialization in automotive and portable application. However, challenges still remain related to the high cost especially the precious metal cost, relative low performance at low platinum loading, and poor long-term durability.

The SWNT/CNF buckypaper based Pt catalyst has shown a good Pt utilization and a good durability under an accelerated degradation test in a mimic cathode environment in our previous patent application. However, this new invention by using the Pt/DLBP with tailored gradient structure was demonstrated even better Pt utilization and stability. Therefore, the fuel cell made with this new structure catalytic electrodes will have better power density and operation time, and low cost. 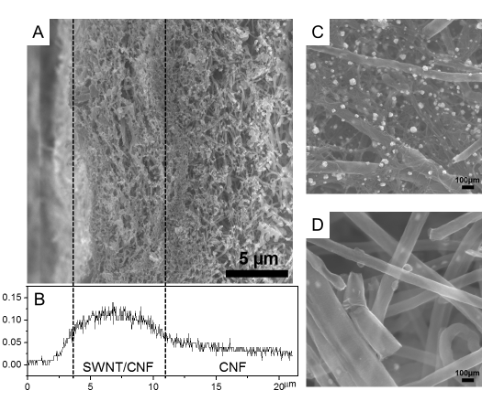