Hardware-in-the-loop (HIL) is a form of simulation wherein a hardware device is interfaced to a digital real-time simulator (DRTS), which models the system that the hardware is intended to be connected to in the real world. HIL simulations offer a method to test physical devices under real time operating conditions. Various scenarios can be tested in a controlled environment to evaluate the performance of the device under test (DUT) before it is connected to the actual physical system.

Most HIL simulations are closed-loop meaning that the response of the device is fed back to the DRTS. One type of closed-loop HIL is a Power HIL (PHIL). PHIL simulations involve interfacing the DRTS with a power device such as a motor, generator, transformer, inverter, etc. (DUT). The DRTS and the DUT exchange power over the PHIL interface. In some instances, a digital to analog (D/A) converter, which is included as part of the DRTS provide analog signals scaled down to electronic levels within ±10Vpk, ±10mA. In other instances, digital signals may be exchanged. These voltage levels are well below the operating voltage/current range of the DUT, therefore amplifiers and/or actuators are required in PHIL simulations to scale the signals sent from the DRTS to the DUT.

Due to the closed-loop nature of PHIL simulations and the natural delays in the feedback loops, instability is often a problem, and can lead to damage and/or destruction of the equipment involved in the tests. Very little has been published regarding protection methods designed to detect instabilities in PHIL systems. Some of the proposed methods to detect these oscillations include over/under frequency protection and harmonic distortion-based protection.

The invention provides a method for detecting instability in a PHIL simulation. The PHIL includes a RTS, a DUT, and an amplifier electrically connected between the RTS and the DUT. The method includes computing in a RTS a magnitude of a time-derivative of reference quantities and applying a low pass filter thereto. The method also includes comparing an output from the low pass filter to a threshold for detection of oscillations of the reference quantities. When oscillations are detected a mitigating step is applied to the DUT. The invention includes other variations of a similar concept. 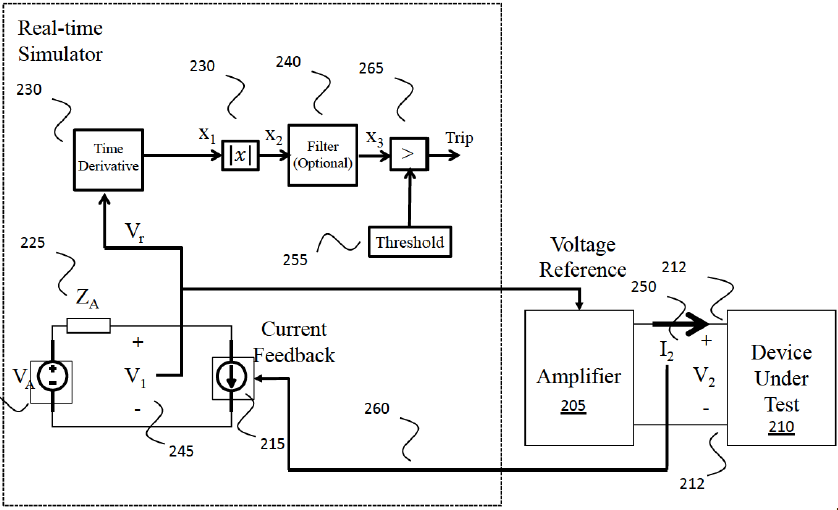