The distribution of corrosive and non-corrosive sulfur in petroleum and its fractions is accomplished by the separation of the relevant classes of sulfur compounds by ligand exchange chromatography combined with determination of sulfur content in the initial oil and its separated fractions by appropriate analytical measurements.

Sulfur compounds in petroleum present in enormous variety of chemical structures. For the purposes of this invention, we define "'corrosive sulfur" as the organic sulfur that generates H2S under thermal stress. Research indicates that such compounds (mercaptans, alkyl sulfides, and disulfides) are corrosive in refinery stress at temperatures between 250-400"C (450-700'F). Thermally stable organosulfur compounds (thiophenes, thiophenols, and aryl sulfides where sulfur electrons are conjugated with the aromatic ring) are termed '"non-corrosive".

In the invention, a cation exchange sorbent (either a silica or polymer-based phase) is converted to its Ag form and a sample is eluted into two fractions. The first solvent mixture elutes non-corrosive thiophenics and aryl sulfides while the second solvent mixture elutes sulfides and disulfides. Mercaptans (thiols) remain on the column but can be recovered through additional treatment. By analyzing the initial sample and the two fractions by appropriate S techniques, it is possible to calculate the distribution of total S into non-corrosive (thiophenic) and two corrosive types. The latter consists of corrosive sulfide/disulfides that elute in the second fraction the mercaptans (difference between the initial S and sum of the fractions). Thus, the invention provides a convenient methodology for quantifying the distribution of S-types in petroleum and its distillate fractions.

The fractions generated by this cartridge separation are also suited for subsequent characterization of the isolated fractions by the sophisticated methods described above. It is equally obvious that this sequence of solvents can be incorporated in a HPLC separation without any need for back-flushing.

Alternate solvent combinations and sorbents are being considered to broaden the scope. Several options are being pursued to determine the most appropriate method for sulfur analysis. The separation has been validated with model hydrocarbon and sulfur compounds as well as with GC/MS analysis of isolated fractions for a number of crude oils and distillate fractions. Once the appropriate S-technique(s) have been identified, additional samples will be analyzed to generate a wider database. 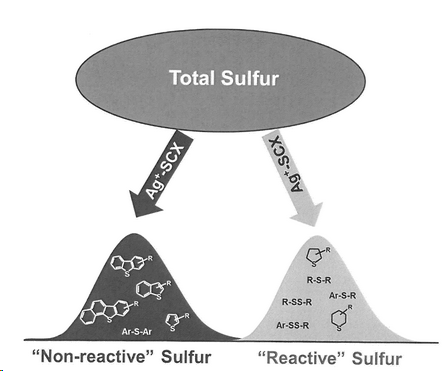